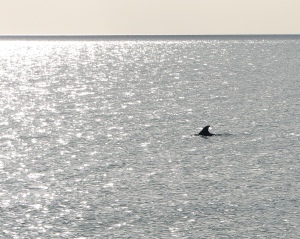 When I was a senior in high school, my family took our first trip to the beach in thirteen years.  To say I was excited to get back to the ocean is an understatement.  I grew up splashing around in ponds and rivers.  I knew the beach was going to be amazing.

Little did I know the best was yet to come.  The first day in the water we saw dolphins swimming just off shore.  Dolphins!  You don’t see a lot of dolphins in ponds.

I was already in the ocean, halfway out to them when I spotted them.  They were swimming in a straight line parallel with the beach. Could I actually intercept them before they passed by?  If I hustled, I thought I could at least get close. How cool would it be to swim with dolphins?

But as I swam closer, I started doubting my marine biology skills.  It suddenly hit me.  I’m from Indiana.  What do I know about the ocean?  I assumed they were dolphins, but I wasn’t exactly Jacque Cousteau.   All I could really see were gray fins.  Who in their right mind swims toward gray fins?

So I did a 180 and torpedoed back to shore.  No shark in dolphin’s clothing would be eating me for lunch.

Okay, so I’m the chicken of the sea.  You can’t really blame me though.  I’m not exactly the first person to flee from fear of the unknown.

How many times has that kind of fear held all of us back from plunging into unexplored waters and the adventure waiting for us on the other side?  Whether it’s taking a risk with a new job, a new friendship or a new relationship with God, it’s tough to keep going when the fins of fear start circling.

I can’t tell you how many times I’ve been afraid, not of a real, tangible threat, but simply the possibility of what might happen, what might be lurking, just beyond the edge of my experience.

The Bible tells a great story about a guy named Joshua who was freaking out because God had put him in charge of leading his people into the new land God had promised them, a land full of endless threats and danger.

Yet, God told him, “Be strong and courageous. Do not be afraid; do not be discouraged, for the Lord your God will be with you wherever you go.” (Josh 1:9 NIV)

In other words, there’s no use being afraid of the unknown when you walk with a God who knows everything.  God has already explored the depths of the waters of our murky future and is beckoning us on as if to say, “Come on in.  The water’s fine.”