There’s nothing more relaxing than a day at the beach with your family, unless, of course, your daughters start feeding the birds.  All it takes is tossing one piece of bread on the sand to turn your seaside picnic into a scene from an Alfred Hitchcock movie.

For my money seagulls are the telemarketers of the animal kingdom: persistent, annoying and constantly interrupting your meals.  To my daughters, however, they’re magical, as enchanting as the birds who helped the mice sew Cinderella’s dress for the ball.   They adore them.

So on this past spring break, before I even knew what happened, half our picnic had gone to the birds.  My girls weren’t satisfied with just throwing food at a distance, they wanted to get as close to them as possible.

They spoke gently to the gulls, and using their bread as bait, lured them to within petting distance.  Then they tossed the bread in the air and watched the gulls pluck it out of the sky just a few inches from their hands.  The birds were loving it.

The whole thing looked like so much fun a little boy walked up and joined in on the act.  He was probably four or five, and he copied my daughters’ technique to get to the birds to fly in as close as possible.

Except instead of bread, he had a stick.

END_OF_DOCUMENT_TOKEN_TO_BE_REPLACED 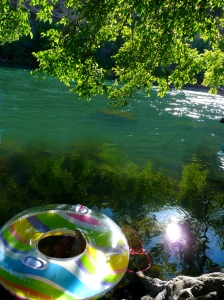 When you’re the parent of a preschooler, water parks are anything but relaxing.  You spend most of your time chasing your kids across hot pavement, wiping water out of their eyes with a towel or helping them dodge hairy men in the wave pool.  If you want to catch a break, the lazy river is your only hope.

I don’t know who invented this concept, but it’s brilliant.  The whole idea is to lay down on an inner tube and do nothing.  You float.  That’s it.  If your kid is a big enough to hold on to a tube, you can almost take a nap.

Unfortunately no one told my four-year-old this.  The second we hit the lazy river last week, she took off running.  I’d just settled into my tube when she bolted like an Olympic sprinter.  I wanted to yell, “Hey, this is the LAZY river.  That is not lazy!”

END_OF_DOCUMENT_TOKEN_TO_BE_REPLACED

For the last six months my three year old daughter Kate has refused to go to sleep without a slice of bread.  She doesn’t always eat it.  Usually she just takes a bite and sets it by her pillow in case she needs it.  I’m sure it totally negates the effect of brushing her teeth before bed, and all the dentists reading this either now condemn me as a bad parent or hope I start bringing my family’s business to their office.

The other bad part about Kate’s nocturnal bread addiction is the fact that every morning we have to brush a couple of tablespoons of crumbs off of her sheets.  I’m guessing if you looked under the corner of her bed you’d either find enough crumbs to make a pan of Thanksgiving stuffing or one happy mouse.

I appreciate that Kate doesn’t get greedy with the bread.  She’s strictly a one slice a night girl.  No more, no less.  She asks for exactly what she needs.